The Life and Times of Werner & Klaus 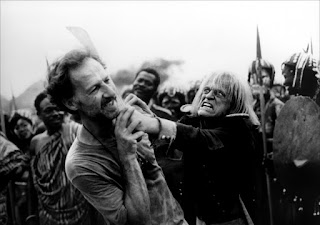 They were a director/actor team like Scorcese and DeNiro, with a much more colorful history due to the fact that Kinski was clinically insane and Herzog isn't quite right in the head either.

When Herzog was a kid, his family shared a house with Kinski for a few months. During that time, Herzog witnessed Kinski assault a critic for saying his performance in a theatrical play was merely excellent. He also remembers Kinski locking himself in the bathroom for 2 whole days, raging and demolishing everything in sight for no apparent reason.

Years later, during a theatrical performance, Kinski hurled a lit candelabra from the stage at an audience deemed insufficiently appreciative, nearly burning the theatre down.

Their working relationship started with Herzog sending Kinski the script for "Aguirre". Herzog: "Between three and four in the morning, the phone rang. It took me at least a couple of minutes before I realized that it was Kinski who was the source of this inarticulate screaming. And after half an hour of this, it dawned on me that he found it the most fascinating screenplay and wanted to be Aguirre."

During the jungle shoot, Kinski nearly split a fellow actor's head open with a sword - thankfully the other guy was wearing an iron helmet. Irritated by the noise coming from a hut where cast and crew were playing cards at night, Kinski fired a rifle three times at the hut, blowing off half an extra's finger.

From the beginning of the production, Herzog and Kinski argued about the proper manner to portray Aguirre. Kinski wanted to play a "wild, ranting madman", but Herzog wanted something "quieter, more menacing". In order to get the performance he desired, before each shot Herzog would deliberately infuriate Kinski. After waiting for the hot-tempered actor's inevitable tantrum to "burn itself out", Herzog would then roll the camera.

Herzog was using all his savings to produce this film, located in the jungle. More than halfway through filming Kinski threatened to leave the production (something he had done 35 times between 1967 and 1972 ruining all those films) because Herzog wouldn't fire a photographer Kinski didn't like. Kinski got on a boat and was about to row away and according to Herzog: "I said, 'Klaus, I don't have to make up my mind. I've had months of deliberating where is the borderline that we will not transgress. This would be the transgression, the borderline. This is something that you will not survive. I do have a rifle. You could try to take the boat and you might reach the next bend of the river but you'd have eight bullets through your head. You know the rifle takes nine bullets... Guess who gets the last one?' And he looked at me and he understood it was not a joke anymore. I would have done it. He understood he'd better behave".

After a few months or years not speaking to each other, things would cool down between them. Then, Herzog would need Kinski's acting prowess for the obsessed characters in his films, while Kinski would need Herzog to "bring out those innermost qualities" he had.

After Aguirre they did the acclaimed Nosferatu remake and followed that with "Fitzcarraldo". Fitzcarraldo is the true story about a man who decided to make money by collecting rubber from an area in the amazon jungle unreachable by boat. He did this by taking a 30 ton boat through the river, convincing native indians to haul the boat over a small mountain(!), reach the rubber, fill the boat with rubber, and carry the boat back into the sea. To achieve authenticity (which Herzog calls "the ecstatic truth") Herzog decided to do the exact same thing using native indians, no models, no special effects. The only difference is that he decided to use a 320 ton steamboat.

Kinski always wanted to be the centre of attention and would get pissed off when this didn't happen, for example when a lumberjack working on the film had to saw his own leg off after being bitten there by a snake, or when a plane carrying 6 of Herzog's crew crashed into the mountains.

Filming in the jungle always made Kinski go nuts.

Kinski's antics scared the natives. Towards the end of the shoot, one of the native chiefs offered to murder Kinski for Herzog. Herzog refused, but only because he needed Kinski to complete filming.

Herzog: "Every grey hair on my head I call Kinski. People think we had a love-hate relationship. Well, I did not love him, nor did I hate him. We had mutual respect for each other, even as we both planned each other's murder." Once after receiving a lashing from Kinski over the phone, Herzog drove to Kinski's house with a jerrycan full of petrol intent on burning the house down with Kinski inside. Herzog changed his mind halfway on route, mainly because he was afraid of Kinski's big Alsatian.

Now, let's focus more on the guy who once ate his shoe...

In 1982, Herzog, learned his dear friend, the film historian Lotte Eisner, was dying in Paris. Thereupon, he abruptly stopped all projects he was working on, and set off to walk from Munich to Paris, convinced Eisner would not die before his arrival. He turned out to be right.

Once, Roger Ebert invited Herzog to a film festival. At the time, Herzog was on a plateau in a South American rain forest, so he made his way by log canoe and trading skiff to a pontoon plane that took him to a boat, etc. "He came because it was so difficult. If Werner had been in Los Angeles, it would have been too easy, and he might not have made the journey."

A couple of years ago Herzog helped Joaquin Phoenix out of his overturned car after Phoenix's brakes failed and he collided with another vehicle. Phoenix was saved because he was wearing his seat-belt. According to Phoenix, "I remember this knocking on the passenger window. There was this German voice saying, 'Just relax.' There's the airbag, I can't see and I'm saying, 'I'm fine. I am relaxed.' Finally, I rolled down the window and this head pops inside. And he said, 'No, you're not.' And suddenly I said to myself, 'That's Werner Herzog' There's something so calming and beautiful about Werner Herzog's voice. I felt completely fine and safe. I climbed out. I got out of the car and I said, 'Thank you,' and he was gone."

Recently, Herzog got shot with a .22 Air Rifle during a BBC interview.

The pellet went through his thick leather jacket and into his belly. He asked the interviewer to finish the interview and never checked into hopsital. Herzog: "I didn't want to have police called, because when you report to police you have been shot at by a man with a rifle, they send out a helicopter and a SWAT team. They would have over-reacted, and I thought, 'this is not a serious bullet, this is part of the folklore of LA, this is something we can laugh about it later on,' and we laughed a lot. I have been shot at with much more serious bullets before, in my life, and what I am trying to say, it's something very exhilarating for a man to be shot at with little success."